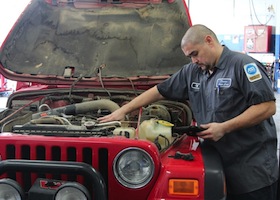 There’s nothing more frustrating for car owners than their car not starting. They can’t go to work, they can’t drive around for chores, they can’t drive to the mall. Basically, they’re stuck at home without a working vehicle. This is why the Cathedral City alternator repair is such a dreaded word. But don’t worry, because Davies Auto Care is here. The truth is that alternator repairs can be cost-efficient, provided that the alternators did not sustain too much damage to its inner components. If the inner components are really beyond salvaging, then it may be time for a replacement.

To understand problems and solutions for alternators, one needs to first understand what an alternator does. Basically, a car alternator is a device that facilitates a car’s ability to charge the battery while driving. The car will run fine on its own because the engine uses gasoline, but other components of a car rely on electricity from the battery. So if the alternator is defective, many of the crucial components of a car will not work, or at best, work intermittently.

The most common problems you will encounter if you have alternator problems include:

There are other minor symptoms that could point to other problems with the car, but might also be coming from a defective alternator. This includes a whining sound when driving at certain speeds, which might be coming from the alternator belt. If this happens to you, it is important to get your alternator checked at Davies Auto Care, because it is still possible to salvage the existing alternator instead of needing a replacement.

Car owners should also pay attention to their “car battery light”, because this is designed to alert you when the voltage of the battery is starting to go below the point of usefulness. It can be used as a good indicator of problems with the alternator. Davies Auto Care can also examine the car battery light and use it as a starting point to find out whether you have a problem with the alternator, or an underlying problem elsewhere requiring Cathedral City engine repair. Our technicians have training and experience in looking beyond the symptom in order to address the root cause of the problem.

If you are experiencing any problems with your car that may relate to the alternator, don’t hesitate to contact Davies Auto Care and we will help you sort out your car alternator problems.