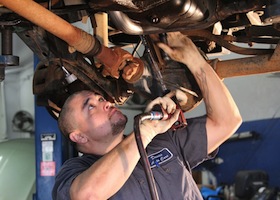 Coolant hoses and automotive belts are frequently overlooked components in auto service. This is something that Davies Auto Care aims to address, because neglecting the various belts and hoses in a vehicle can result in serious problems that require professional auto service. Cathedral City residents and nearby desert cities in particular need to be extra careful. The exceptionally hot climate they are under will make the belts and hoses much easier to succumb to degradation if not properly maintained.

There are two major belts and hoses in a vehicle:

Timing Belt – known as the car timing belt, this component handles the synchronization of the engine valves and pistons. It is in charge of the rotation speed of the camshaft. The timing belt will wear out eventually due to use, with most car manufacturers recommending a replacement every 60 to 90 thousand miles. Car owners should keep a watchful eye on their timing belt, because its failure could lead to serious damage to the engine. There are cars that use a chain instead of a belt for their timing, but the principle is still the same. It still needs to be properly maintained (in this case, with the use of a lubricant.)

A large number of older cars have many of their smaller belts replaced with a serpentine belt, which drive multiple components and can affect seemingly unrelated parts and services needed in the car, such as a Cathedral city fuel filter change. If this is the case with your car, you need to be more watchful over its condition. Since a serpentine belt handles more things at once, its failure could also lead to more problems occurring at the same time. Serpentine belts are also much more difficult to service, making DIY repairs inadvisable for car owners without extensive automotive repair backgrounds. It is much better to get professional belts and hoses repair from Davies Auto Care.

Regardless of what type of timing belts and hoses a car is using, the best way to keep the vehicle in good working condition is still preventive auto maintenance. This will not only prolong a car’s lifespan, but will also save more money in the long run. A well-maintained car will not need as much costly repairs and replacement as a neglected car.

At Davies Auto Care, we understand that many drivers don’t have the time to pay close attention to all the belts and hoses inside their car. So we will keep an eye on them for you. We can catch potential problems and notify you if it is in need of maintenance or repair, before the problem becomes too serious and costly to repair. Contact us now if you have need of our professional auto technicians.